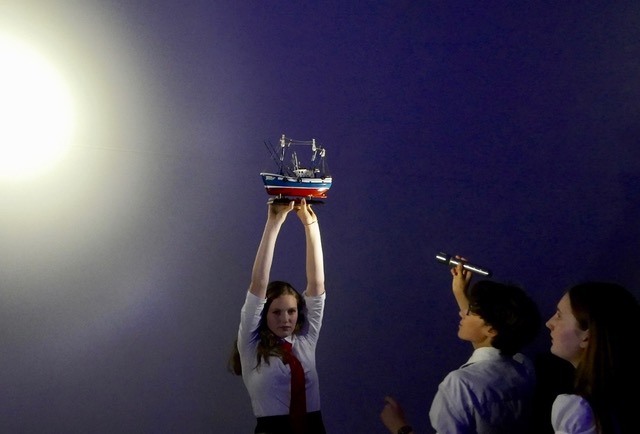 Lost at Sea is the most recent of East Neuk Festival’s Big Projects which bring together community musicians with top professional to create new work that reflects the landscape, history or heritage of the East Neuk of Fife.

15 pupils from Waid Academy in Anstruther worked with sound artist, Scanner over 3 months to create a performance and installation piece in memory of Fife men lost at sea in the fishing industry, and the families they left behind. Anstruther was (until recently) a key Scottish fishing port and this project gave the students the opportunity to explore their heritage, create the piece (recording footage for inclusion, collaborating with Scanner on the creation, performing the live elements of the piece). The result – performed to an audience that included many fishing families alongside regular festival attenders, was powerful and moving. “…essentially a sound installation by composer Scanner conceived as a tribute to the many men in the East Neuk fishing industry who lost their lives at sea, but given human voice in this premiere presentation in Waid Academy, Anstruther (****) by confident young musicians from the school. The concept was simple and unpretentious, with minimal symbolism, yet was all the more moving for that. The pulverising soundtrack is gnawing and evocative.” (Scotsman)

Following the performance, a version of the piece was installed at the Scottish Fisheries Museum where it was heard by more than 5,000 visitors over the summer.

Get Composing is a new initiative launched in 2018 offering a year-round programme of composition workshops led by professional composers to give young people in the North East a rare opportunity to develop their compositional skills and voice. One of the first intake of composers has been awarded a place to study composition at RCS from 2019 onwards. Another 13-year old was the only Scottish finalist in the Benslow Music Young Composer's competition.

Incredible Distance was a creative and collaborative arts project with adults living in Wester Hailes which formed part of the Scottish Chamber Orchestra’s three-year residency in the area. An open invitation was made to adults living locally and, over six weeks of sessions at WHALE Arts working in collaboration with composer Suzanne Parry and workshop leader Emma Smith, participants created an original audio-visual installation which explores the sonic and visual identity of Wester Hailes, capturing snapshots of daily life through the collection of found sound, imagery, film and original musical composition. Material was gathered using only to hand (mobile phones and cameras), and through a process of capturing music making workshop activities on handheld recorder.The workshop process yielded two out comes:

The following Wester Hailes Residents signed up to participate in the project. Age range of the group was from 28-70 with the majority being over 50.