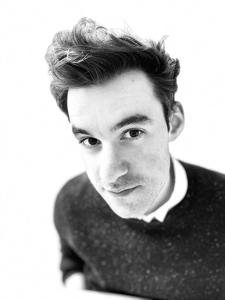 Edwin Hillier is a British composer active in Glasgow and London. His work investigates the connection between musician and instrument, employing a tactile and highly physical approach to sonic exploration. Edwin’s music has been presented internationally, including performances at the Huddersfield Contemporary Music Festival – with UK premieres in both 2014 and 2015 – Royaumont Festival (France, 2016 and 2017), at the Wigmore Hall, Kings Place, Roulette NYC, Nonclassical, and by artists including the London Sinfonietta, Quatuor Tana, EXAUDI, Explore Ensemble and Talea Ensemble. Recent works have been broadcast on BBC Radio 3, France Musique and recorded on the NMC Record Label. His large-scale spatial composition – Dhātu – last year received a 2020 Scottish Award for New Music.

​Edwin has been selected for international composition programmes including Voix Nouvelles (Royaumont, France, 2016) – returning as an academy Laureate and as recipient of an André Jolivet commission in 2017 – Dartington International Summer School (2015), Luxembourg Composition Academy (2015), IRCAM/Manifeste (2018) and Sound and Music’s Next Wave programme. He has received tuition from Pierluigi Billone, Raphael Cendo, Frédéric Durieux and Rebecca Saunders, amongst others.

​A graduate of the University of Cambridge, Edwin attained a scholarship to the Royal College of Music to pursue his postgraduate studies, supported by the RVW Trust and the AHRC. He is currently completing a doctorate in Composition under the supervision of Jonathan Cole.

​At the RCM Edwin teaches Academic Studies units at undergraduate level and is Module Leader for the postgraduate Musical Analysis course.