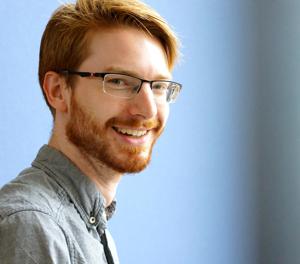 Neil Tòmas Smith is a composer of chamber, orchestral and choral works based in Edinburgh. He studied in York and Stuttgart, the latter leading to a keen interest in German contemporary music and a forthcoming book on composer Mathias Spahlinger.

Neil won first prize in the Acht Brücken Composition Competition with Gravitation, which was played by Schlagquartett Köln and broadcast on WDR 3.  His orchestral work, Habitus, was also broadcast in a performance by the WDR Symphony Orchestra.

In 2018/19 Neil took part in the RSNO Composers’ Hub and the LPO Young Composers’ Programme, resulting in the space-inspired diptych Aphelion / Perihelion. He was also selected to take part in the Making Music’s ‘Adopt a Composer’ scheme, during which he worked with Thame Chamber Choir in South Oxfordshire on a new piece, The Hoard.

Current projects include a collaboration with Esther Kate Swift on a work for speaking harpist, a new piece for Rebecca Hardwick using quotations from the BBC adaptation of Pride and Prejudice, and Stop Motion Music for 3 flutes and vibraphone.

See the full list of works by Neil Tòmas Smith