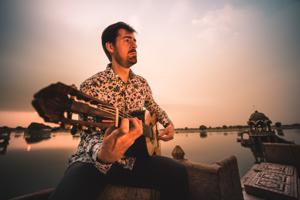 Described as “one of the most important musicians of his generation" (ThreeWeeks), Simon Thacker is a composer, classical guitarist, improviser and ensemble leader. His ever expanding musical world develops new possibilities through a deep immersion in diverse cultures.

As well as touring as a classical guitar soloist whose music expands the soundworld of the instrument, Simon has also developed some of today’s most prescient ensembles, all of which exclusively perform his original compositions and reimaginings.  Simon Thacker’s Svara-Kanti is a world leading Indo-Western community of lineups expanding on Hindustani, Carnatic, Punjabi folk and Baul spiritual influences. This has seen him tour and collaborate at major festivals in India, Pakistan and Bangladesh, including for an audience of 60 000 in Dhaka and at The Sacred Pushkar, one of the region’s biggest sacred music festivals. Their 2018 Trikala double album was acclaimed across the world, notably in India and Bangladesh in major periodicals such as The Hindu, Times of India and Rolling Stone India, and won a Scottish New Music Award in 2019.  Simon Thacker's Ritmata is Simon's musical laboratory with three of Europe’s leading improvisers (classical guitar, piano, bass, drums). Karmana with Polish cellist Justyna Jablonska seeks a new vision for chamber music. Songs of the Roma with Justyna and Roma singer/violinist Masha Natanson envisions a new Romany musical journey. All of these groups have been selected for the prestigious Made in Scotland showcase. In the studio he has taken the backwards recording technique pioneered by Jimi Hendrix and the Beatles to new heights.

Simon's pieces have been played on radio in over 50 countries. As an educator, he has been classical guitar tutor at Edinburgh Napier University and Edinburgh College for over fifteen years. He has performed as soloist with many orchestras, including the RSNO.

In December 2019 he toured his new Pashyanti solo programme in India, including Goa and Gurgaon International Jazz Festivals, and the Delhi "Giants of Jazz" series. Pashyanti was selected to represent the country as part of the Made in Scotland showcase at the Edinburgh Festival Fringe. In February 2020 Simon presented an instrumental trio incarnation of Simon Thacker's Svara-Kanti at Celtic Connections. In March 2020 he brought the India and Bangladesh based Bengali Baul spiritual lineup of Svara-Kanti to tour Scotland. His latest album Tàradh, with Simon Thacker's Ritmata, was released in November 2019. The centerpiece of the album, Quadriga in 5, was nominated for the Ivors Composer Awards, the most prestigious in the UK. In July 2020 Simon brought together 19 leading musicians from 9 countries for his transformation of We Shall Overcome. His next album release will be with Songs of the Roma.