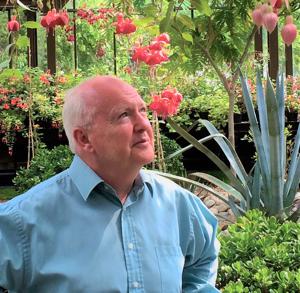 Thanks to the University of Glasgow's McEwen Bequest, my career was kick-started by commissions  premiered there. These included my first - from James Durrant in 1972 - Martyr for violas, followed  by   Liberation (1975; marking the end of the Vietnam War) for the New Music Group of Scotland and Wind Octet (1980). Larger scale works ensued - like my symphonic poem Calgacus (premiered and broadcast live in the Bute Hall, University of Glasgow 1976). Others celebrating my home city are Clydebuilt (for the Ulster Orchestra), Hall of Memories (for opening of the refurbished Glasgow City Hall), Junk Shop Blues (after Joan Eardly's painting of a 1950s 'rag and bone' shop) and Riverside celebrating the Clyde and its ships (performed by The Whistlebinkies and Scottish Chamber Orchestra 1991); operas to librettos by Marianne Carey - a 3-act opera The Loving of Etain (Paragon Opera, 1990) and Cake-Talk (a Scottish 'creation myth' for RSNO and 100-strong RSNO Junior Chorus celebrating its 25th anniversary in1996); and a 3-act ballet Peter Pan - faithful to the JM Barrie original - performed over 120 times by Scottish Ballet and Hong Kong Ballet between 1989 and 1996.

My enthusiasm for voices came to fruition in such works as The Pipes of Peace for solo bagpipes (again performed by Robert Wallace) with the 80-strong RSNO Chorus for their 1986 tour of Israel and Palestine and repeated at the Musica Nova festival. A vocal highlight was writing Let the Games Begin for the 2014 Commonwealth Games festival for Glasgow Chamber Choir, setting a new poem that I in turn commissioned from Tom Furniss. In 2017 I worked again with Tom Furniss (Senior Lecturer in English University of Strathclyde) to compose a work for Heriot-Watt University Choir and New Music Group for performance in Iona Abbey - On Inchcolm. Tom and I were thrilled to hear it at the Abbey in June. My setting of poems by John Donne for Paisley Abbey Choir (conducted by George McPhee with Ewan Robertson on bass flute) premiered on March 4th 2018, titled Three Donne Lyrics. Priory Records has now released it on the CD Celtic Prayer. When John Wallace retired from the position of Principal of RCS, I was commissioned to compose a farewell piece, setting my own text in Songs from the North which has now been recorded by soprano Julia Daramy-Williams and The Wallace Collection brass quintet and released on CD.

Early on, my confidence in composing for strings was boosted by Rant being chosen as test piece for the Carl Flesch International Violin Competition (1978) and String Quartet for the 40th anniversary Barbican Gala of the SPNM (thrillingly, this was broadcast live on BBC Radio 3 by the Arditti Quartet). The 1972 success of Martyr led to Divertimento (for 20 Violas) and Viola Concerto (for the 1998 International Viola Congress). A body of work for guitar, including a Guitar Concerto, (largely commissioned by Phillip Thorne) led to my being Featured Composer at the 1996 Bath International Guitar Festival.

In recent years I have enjoyed greatly working with such fine ensembles as Paragon (in a piece dedicated to Martin Luther King Junior, Dangerous Orations), Sax Ecosse (Hidden Dialects - inspired by George Donald's tales of the Doric), Illuminati Wind Quartet (Winds at Sea - inspired by my voyages performing on National Trust for Scotland cruises), Kyle Horch's saxophone ensemble Flotilla (Remembrance - in memory of my parents), Mr McFall's Chamber (Nocturnes - a remembrance of the war in Yugoslavia), the Da Vinci Trio (Elegy) and the Edinburgh Quartet with Jessica Beeston, viola (The Silent Traveller Returns inspired by Chung Yee's Silent Traveller in Edinburgh) and with them, John Kenny (trombone) and Catriona McKay (Harp) in a brilliant recording of my Guest Sextet. The Monzani Trio performed my Four Dorset Folksongs and their string trio members were chosen to premiere my String Trio II - a McEwen Bequest Commission - at the University of Glasgow's Concert Hall in 2019.

Buy or hire at SMC

See the full list of works by Eddie McGuire